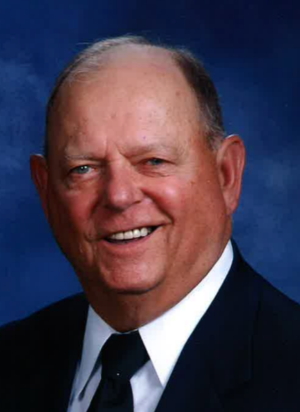 William H. Dengler, age 80, and a long-time Haddonfield resident passed away on Saturday, October 9, 2021. Bill was the beloved husband of 57 years to Virginia “Ginny” (nee Schmauder). He was a loving father of Bonnie L. Walter (John) of Haddonfield, William H. Jr (Patty) of Haddonfield, and Brian E. (Julie) of Haddon Twp. He was a devoted Pop Pop of Johnny Walter (Katie), William Dengler III (Rachele fiancée), Alex Walter, Chris Dengler, Wes Dengler, Jake Walter, Ella Dengler, Graham Dengler, and Gillian Dengler, and a Great Pop Pop of JJ Walter. He was predeceased by parents Margaret and William and two brothers Robert and Vernon Foster and sister-in-law Marie Foster. Bill was a much loved brother-in-law to Barbara Dengler and Carolyn and Ed Schmauder as well as an uncle, cousin, and friend to many.

Bill graduated from Haddonfield Memorial High School and earned an AD from Temple University and his BS in Chemistry from St Joseph’s University. He started his career at National Lead Co. before working for Sherwin Williams, Finneran and Haley, and Gilbert Spruance. Later in his career, he co-founded “Coating Development Group, Inc”, a paint manufacturing company in Philadelphia, PA. He was a long-time member of the Philadelphia Paint and Coatings Association and the Philadelphia Mixers Club where he enjoyed monthly golf, cards, and dinner with friends.

Bill was very active in the Haddonfield community where he helped to establish the youth wrestling program, coached youth football and baseball and served as the president of Haddonfield Little League. Bill was a member of the Haddonfield United Methodist Church for more than 50 years and served on the administrative board and taught a Sunday School class for teenagers.  Bill refereed high school football games around South Jersey for many years. He enjoyed fishing, golfing, cards, and was a past member of Tavistock Country Club and Seaview Country Club. Bill will be deeply missed by his loving family and all who knew him.

Bill’s family will greet friends on Monday, October 18, 2021, 9:30-10:45 AM at Haddonfield United Methodist Church, 29 Warwick Rd, Haddonfield, NJ. 08033; where his Memorial Service will follow at 11 AM. Masks are required inside the church.   Interment is Private. In lieu of flowers, donations for an annual scholarship fund awarded to a Haddonfield Memorial High School Football Player in honor of Bill Dengler would be appreciated.   Kindly make checks payable to “Haddonfield Public Schools” and mail to:  Haddonfield Memorial High School, ATTN:  Lefteris Banos, 401 Kings Hwy. E., Haddonfield, NJ 08033.