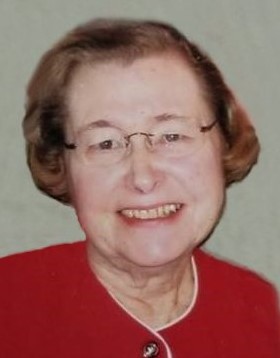 (nee Adams) age 91, passed on October 5, 2020.  She was a longtime resident of Haddonfield before moving to the Wiley Christian Community in Marlton in 2008 with her beloved late husband James O. Keane Jr.  She was the devoted mother of Robert (Elisa) of Haddon Twp., NJ, Carol K. (Fred) Walker of Richmond, VA, Janet Keane of Cherry Hill, NJ and the late Gary J.; Loving grandmother of Thomas, Christopher (Cari), & Emilie Keane, Melissa & Julie Walker, Megan Garvey (Michael) & the late Michelle Carroll.  She was the dear sister of the late Joan Murphy.

Thelma was raised on her family’s dairy farm in Medford, where she loved milking the cows and showing her prized cow, Bessie, at the 4H shows.  After graduating high school, she worked as a secretary for Campbell Soup. Prior to getting married, her adventurous spirit took her on a solo trip out west, the highlight of which was a mule ride down to Phantom Ranch in the Grand Canyon.  Thelma enjoyed going to dances as a young lady and this is where she met her beloved husband, Jim.  Thelma was a loving, devoted mother, a talented cook and seamstress and dedicated leader of her daughters’ Girls Scout troops. Thelma was an active member of the Haddonfield United Methodist Church for many years.   She enjoyed being with her family and travelling with her husband and sister.  Thelma loved hugs & blowing kisses to family & staff at Wiley. She was a kind, gentle soul who will be missed by all.

Thelma’s service will be held privately.  In lieu of flowers, memorial donations in honor of Thelma may be made to Wiley Employee Appreciation Fund, 99 E. Main St., Marlton, NJ 08053 or the charity of your choice.