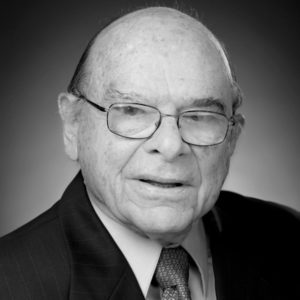 Tom grew up in Camden, NJ and graduated from Camden High School in 1942. Instead of joining the family business, N. Bantivoglio & Sons Camden Iron and Metal, Tom chose the academic route, attending Princeton University (1946) and Harvard Law School (1948). Blessed with a brilliant mind, he joined then-Archer, Greiner, Hunter & Read as a young man and was a long-time partner and chair, serving as counsel to a number of corporations and businesses in the area for more than 50 years and leading the firm during a period of great expansion. A mentor to many, his impact was wide-reaching and deeply felt by all who knew him.

Tom met his beloved wife, Pat, in Margate on the Jersey Shore and their romance was ignited by their mutual love of the beach. Theirs was an enduring love story, leading to 69 years of marriage. He took great pleasure in his family and enjoyed spending time with his four daughters and five grandchildren, of whom he was immensely proud. He will be greatly missed by all of them.

A selfless philanthropist, Tom served as a trustee of the William G. Rohrer Charitable Foundation and was active in many local charitable groups throughout the years. He was particularly proud of his donations to Rowan University, where he founded the Thomas N. Bantivoglio Honors Program, which continues to benefit some of the region’s most talented students. In 2004, he received an honorary doctorate in humanities from Rowan University in recognition of his accomplishments.

Tom was passionate about wine and was very active in several wine clubs, including the Confrérie des Chevaliers du Tastevin—where he founded the Southern New Jersey chapter—and the Confrérie de la Chaîne des Rôtisseurs. His love of wine took him to France and Italy, where together with his wine groups he made lasting memories. He shared a glass with many fun and fabulous people, and we raise a glass to him now.

Tom was a man of wisdom, generosity, and warmth. His greatest joy was his family, and he was a loyal friend to many. He was one of the good ones.

In later years, he spent time in Delray Beach, FL, where he loved sitting on the porch and gazing at the Intercoastal Waterway view. May he forever bask in that view, glass of wine in his hand, saying it was a wonderful life and I did it my way!

Tom’s family will greet friends on Monday evening, Feb. 3rd, 6-8 PM at Kain-Murphy Funeral Services, 15 West End Ave, Haddonfield, NJ 08033; and on Tuesday, February 4th, 10-10:45 AM at Christ the King R.C, Church, 200 Windsor Ave, Haddonfield, NJ 08033; where his Memorial Mass will follow at 11 AM.  Interment will be private. In lieu of flowers, the family requests that donations be made in memory of  Tom to Children’s Hospital of Philadelphia. Checks made out to Children’s Hospital of Philadelphia Foundation can be mailed to P.O. Box 781352, Philadelphia, PA 19178-1352. Please remember to write in memory of Tom Bantivoglio on the memo line of the check. Gifts may also be made online at http://www.chop.edu/giving/foundation.