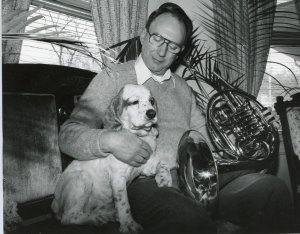 Tom was a wonderful musician.  He had been the Haddonfield Middle School Music teacher for many years.  He was a founding member of the Haddonfield Symphony, played, composed & arranged for the SJ Youth Orchestra & Friends as well as founding & being the conductor of the Haddonfield Pick-up Band.  Additionally, Tom proudly served in the Korean War and was a longtime member of The American Legion Post # 38.  Tom loved corny jokes & music and enjoyed being a lifeguard for many years at Wildwood & later Crystal Lake.

Tom’s family will receive friends on Thursday Evening, June 27th, 6-6:45 PM, at Kain-Murphy Funeral Services, 15 West End  Ave., Haddonfield, NJ; where his Celebration of Life will follow at 7 PM.  Interment, private.  In lieu of flowers, memorial donations in honor of Tom may be made to Samaritan Hospice, 5 Eves Dr., Suite 300, Marlton, NJ 08053 (www.SamaritanNJ.org)