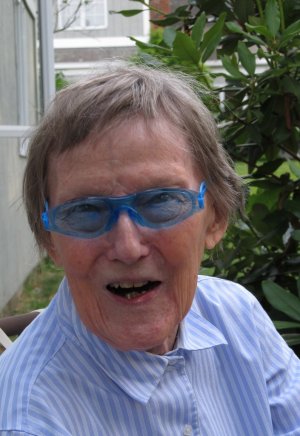 Patricia Lennon, aka Pat, aka Patty Pie, aka Ma Lennon, aka Mrs L, aka the Tough Muffin, departed this life on June 12, in her 98th year.  She took flight peacefully, at home, and surrounded by the people she loved most.

Olga Patricia Heyn was born on Staten Island, New York, in 1922, the first of three children.  Their father abandoned the family when Patty was five.  The children and their mom moved in with Patty’s grandparents, and Patty and her sister Marie were boarding students at Notre Dame Academy on Staten Island.  Patty’s mother remarried in the early 1930s; as teenagers, the girls came home on weekends to a well-appointed co-op owned by their stepfather on Manhattan’s Upper East Side.  They and their brother Robert were adopted and took the last name of their stepfather, Ralph Willett.

Patty met Jim Lennon during World War II, introduced by Jim’s best Navy buddy.  Their first date was on the skating rink at Madison Square Garden.  Patty didn’t know how to skate, but she was damned if those skates were going to get the best of her, and damned if she was going to accept any help from Jim Lennon or anyone else.  That’s when Jim Lennon decided she was the girl for him, and she became his Tough Muffin.  On her part, Patty wasn’t looking for a boyfriend, but she was floored by the handsome guy in dress whites.  (She subsequently became a capable and graceful ice skater.  Of course.)

Patty and Jim settled in Haddonfield in the late 1950s, with their son Beau.  Two other baby boys were lost during childbirth.  When Beau started school, Patty started on her true career, as a mainstay of her community.  The list of organizations to which Patty contributed is hard to believe, and almost too long to count:  Friends of the Library, Home-School Association, PTA, American Field Service, Interfaith Caregivers, Haddonfield Symphony, Haddonfield Planning Board, Haddonfield Democratic Club, Christ the King Bereavement Committee, Crow’s Woods Association, Sunny Day School.  And the two most important in her life:  the Durand Academy, whose board she chaired for nearly 20 years; and the Haddonfield Historical Society, where she was president three times, and was instrumental in the Society’s growth into a vibrant, active center of Haddonfield’s community life.  For a dozen years, she and Jim were surrogate grandparents every school day to a young man from a single-parent home (and became surrogate parents to his dad).  She was Haddonfield’s Citizen of the Year in 1978, and received local, State, and Congressional citations for her contributions to her community.  The new archives center at the Historical Society is being named in her honor.

When Beau finished high school, Patty re-entered the professional work force as a writer and editor for the Curtis Circulation Company in Philadelphia.  Where common sense dictated she cut back on her volunteer activities, Patty cut back instead on her sleep, waking at 4:30 every morning to get her volunteer work done before her paid workday started.  She supported Jim through severe illnesses in the 80s and 90s, until his death in 2002.  She was the best grandmother in the world to Beau’s two sons, Emerson and Edgar, and the best mother-in-law in the world to Beau’s wife, Mary.  In her own 90s Patty gave herself a break from volunteer work and traveled with Beau and her grandchildren to California and the Pacific Northwest, Ireland, and the Grand Canyon.  When living alone became difficult she moved in with Beau in New Hampshire, where for the past several years she has been a source of wit, intelligence, good humor, insight, wisdom, and support for Beau, her grandchildren, now ex-daughter-in-law Mary, grand-niece Morgan, and the many others whose lives she touched.  She was a special woman and a special spirit.  She will be much missed.

In addition to Jim, she was predeceased by her brother Robert.  She is survived by her son Beau (aka Mark) and grandsons Emerson and Edgar, by her sister Marie and her husband Ernest Yelton, and by the many hundreds of people whose lives she touched for the better.

A Memorial Service will be held for Patricia W. Lennon at Christ the King Catholic Church, Haddonfield, on Saturday, October 12 at 10:30 AM.  A reception will follow immediately at the Haddonfield Historical Society.  All are welcome.