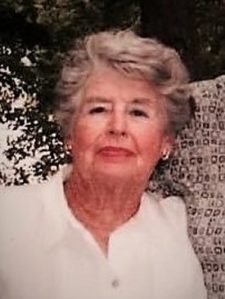 Jeanne was born in Jersey City, NJ and attended St. Vincent Academy in Newark. She and Ray met on a blind date and were married in 1947. In 1956 they settled in Haddonfield where they raised their children in a large, busy, loving home. They were active members of Christ the King Church–one of the families that faithfully filled a whole pew every Sunday.

Jeanne was a devoted mother who always made sure the lunches were packed and the uniforms were ironed. She and Ray created loving memories and traditions for their children and grandchildren. In her free time, she became an avid tennis player and member of the Haddon Field Club.   Later in life she found a new passion when she began taking art lessons.

The family is grateful for the loving care Jeanne received from Cadbury staff and hospice caregivers.

The funeral and interment will be private.

In lieu of flowers, a memorial gift in memory of Jeanne O’Neil may be sent to The New Jersey State Library Talking Book & Braille Center: