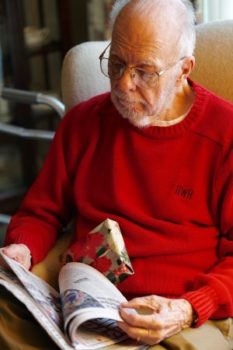 On November 22, 2019 at age 94, Herb passed peacefully at his home in Haddonfield, NJ surrounded by his family.

He was the beloved husband for 69 years of Carolyn Louise (nee Key); loving father of Amy Vasko (Jack) of Richmond, VA and Andrea Hazen of London, England; dear uncle of two nephews and three nieces and their children and grandchildren. He was preceded in death by his beloved parents Fred Wallace Hazen and Laura Lavah (nee Hedrick) and his much-cherished siblings William Robert “Bob” Hazen and Margaret Elizabeth “Peggy” Toops.

Born in Brookfield, MO and raised in Marceline, MO, in his early years, Herb enjoyed riding his bicycle, playing with his faithful dog Jigs, and fishing at the Santa Fe Country Club. In later years, he fondly remembered the sounds of the Santa Fe Railroad trains rolling through Marceline.

As a teenager, Herb met his future wife Carolyn at Hamilton Lake, IN, where they discovered a shared love of boating and spending time on the water. They married in 1950, settled in Haddonfield in 1962, and later built a home at Green Lake, ME, where lobster was frequently on the menu. He was devoted to Carolyn, his sweetheart and the love of his life.

Herb was an accomplished musician, in his early years playing the clarinet in the Marceline High School pep and marching bands and a local woodwind quartet. After settling in Haddonfield, Herb and Carolyn became long-term supporters of the Philadelphia Orchestra. At Green Lake (and elsewhere), Herb loved to lead his family and friends in kazoo marches and song.

Herb received his Bachelor of Science degree in Mechanical Engineering from the University of Missouri in 1947. He then joined and spent his entire 39-year career with Babcock & Wilcox, managing the construction and repair of power plants throughout the eastern United States and internationally, including a 14-month assignment in Spain where he developed a lifelong passion for Spanish food and the language. He loved his work and the people with whom he worked and was regarded by those who knew him as a generous, trustworthy, dedicated manager.

After retiring, and having spent a lot of time on planes and traveling for work, Herb relished being at home with his wife in Haddonfield and at Green Lake, enjoying sleeping in, being with close friends, eating good food. He was an avid reader of several daily newspapers. His desire to be independent, self-sufficient, and not to have a fuss made over him remained with him for all of his days. He never lost his sense of humor, his desire for order, or his frequent use of ‘thank you’, ‘please’, and ‘is everyone okay?’.

Herb is greatly missed and will long be remembered as a devoted family man, a loyal friend, and a gentleman.

Services will be held privately at Fountain Grove Cemetery in Bryan, OH. Memorial contributions in honor of Herb may be made to the Marceline (MO) Middle/High School Music Department or The Grand Lodge of Free and Accepted Masons of Michigan, where Herb was recently recognized for 70 years of service.