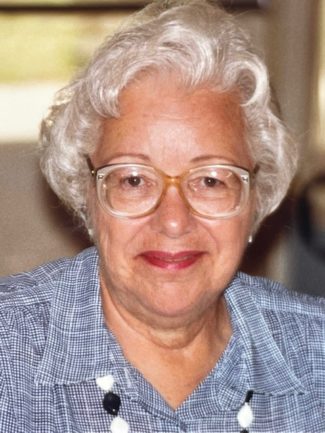 On September 7, 2022, Elinor Scull (nee Stiles) of Medford Leas passed away peacefully at the age of 98 after a wonderful life of family, friends and adventure. She was predeceased by her husband, William E. Scull, Jr. and is survived by her two married children Bill Scull (Katie) and Sandy Plunkett (Larry) and her dear sister-in-law Barbara Stiles. She was blessed with 3 grandchildren: Melissa Plunkett Flynn (Ryan), Kevin Plunkett (Meredith) and Tyler Scull, as well as 5 great grandchildren (Caroline, Anna, Vivienne, Elise and William.) Her family was the light of her life and they spent many happy times together.

Elinor grew up in the Haddonfield, NJ, area where she graduated from Haddonfield High School, attended Peirce Business School and worked as a legal secretary for many years.  She met her dear husband, Bill Scull, an RCA engineer, through their involvement in the First Presbyterian Church of Haddonfield where they remained active throughout their lives. They were married in Haddonfield in 1948 and celebrated 60 happy years in 2008 with a large gathering of family and friends. Sadly, Bill’s health deteriorated after that and he passed away in 2014 from Parkinson’s.

Besides her warm family circle, the hallmarks of Elinor’s life were the deep friendships she made through her activities and involvements, which included avidly playing bridge, leading community service projects, and nurturing lifelong ties with her bridesmaids and sorority sisters (the Sigma Dittos”).

Two great adventures came to define much of Elinor’s life with her beloved husband Bill. The first adventure was spending several years during the sixties on Kwajalein in the Marshall Islands for Bill’s RCA work that focused on radar design, testing and deployment. Life in the tropical Pacific was a joy, enabling them to form deep, life-long friendships as well facilitating major travel opportunities to Hawaii, Japan, New Zealand, Australia, Europe and a daring, whirlwind around-the-world trip.

The second great adventure was spending 18 years post-retirement as motorhome travelers. They drove an ever-larger series of motorhomes (all named “Scullduggery”) criss-crossing all 48 US states, putting countless miles behind them (200,000? 500,000? 1,000,000? who knows?) Again, this life enabled the development of friendships far and wide as they attended motorhome rallies as well as letting them visit family and the dear friends they had made along the way.

Elinor and Bill lived in Haddonfield and later in Cherry Hill when they weren’t on their great adventures. Around 2000, they moved to Lumberton Leas along with Elinor’s sister, Helen Peterson (Robert), as well as her brother, Albert Stiles (Barbara). These close family ties formed an ever-expanding extended family of children, in-laws, aunts, uncles, cousins, nieces, nephews and many “grands.”  Later, when Elinor and Bill’s needs changed, they moved to Medford Leas. Amazingly, Elinor was able to live in an independent-living apartment at Medford Leas until the last 18 months of her life. She and her family were always grateful for the devoted service and compassionate care provided by the staff of Medford Leas.

There will be a private interment for Mrs. Scull in the Garden at the First Presbyterian Church of Haddonfield, 20 Kings Hwy. E., Haddonfield, NJ 08033.  In lieu of flowers, memorial donations may be made to Elinor’s church at the above address.