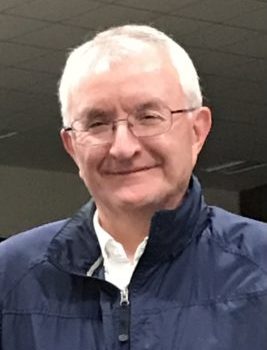 Regardless of the situation, Douglas Patrick Hambry always had the perfect anecdote or quote. Even better, while doing it in one of his wildly funny imitations. On August 8, 2022, we lost him.

Born in Erie, PA in 1952, Doug was the son of Frank B. (Ward) Hambry and Virginia Hambry. He was raised in Albion and Edinboro, PA. After his mother’s passing at age 9, Doug learned that life isn’t fair, and it instilled within him a quiet strength. He was a graduate of the 1970 class of General McLane High School and a 1974 graduate of the University of Notre Dame.

One defined by many characteristics, Doug was known for his intelligence, courage, morality, humor, and work ethic. He was an inspiration to all who had the benefit of knowing him. His encyclopedic knowledge of sports was one for the books. He had a particular love for his alma mater, The Fighting Irish, especially as a devout Catholic.

His passion for sports was only rivaled by his dedication to his work. Considered his second family, Doug spent 23 years at VISA, Inc. as Senior Vice President. Doug is remembered by his colleagues as someone who helped them reach their best. He traveled extensively throughout North and South America, often taking red eyes to ensure spending time with his real family.

To help his In-laws who considered him a son, Doug retired at the age of 64 where he helped them live out their lives in their home. A resident of Haddonfield, NJ, Doug lived with his wife, Ann, who filled his life with love, determination, and a positive outlook everyday. Their triplets brought him immense joy as well.

He is survived by his wife, Ann, sons, Joe and John (Cristina), and his daughter, Virginia. Also, his sister, Betsy (Wayne Whitfield), step-sister, Dorothy Lawrence, and step-brother, Dennis Carr (Ellen).

Services are private. In lieu of flowers, donations may be made to the Adult Day Program his daughter attends at Bancroft www.bancroft.org/support-us/