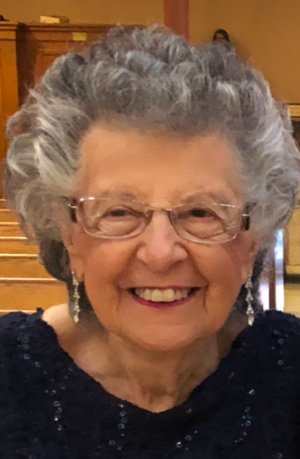 Doris was born in South Philadelphia to a loving Italian immigrant mother and father. She spent her childhood with her two sisters, where they lived above their father’s tailor shop on Snyder Avenue. She graduated from South Philadelphia High School during the World War II years, worked for the War Department, and volunteered at Hahnemann Hospital. Afterward, she worked for the Internal Revenue Service as a secretary, moved to Lansdowne, PA, and married her husband Harry in 1957.

After having two children, her family moved to Lansdale, PA, where she was a homemaker and later worked for the Pennsylvania Department of Unemployment Compensation. She and Harry retired to Miramar, FL, in 1979, where they enjoyed their backyard pool, volunteering at church, and get-togethers with family and friends. Doris and Harry moved to Haddonfield, NJ, in 1990 to be closer to her daughter and their first grandchild. Early in 1991, however, Harry passed away and Doris moved with her daughter’s family to Fond du Lac, WI, where she shined in the role of doting grandmother to her three grandchildren.

She returned to Haddonfield in 2000 and volunteered at Christ the King church and the local library, participated in a book club, and served on various condominium association committees. During that time she traveled to Italy, Spain and Portugal, and made yearly visits to Florida during the winter to make lasagna and Italian wedding soup for her son and his wife.  She was an avid reader of popular fiction and a nightly devotee of 6 Action News, Jeopardy, and Wheel of Fortune.

Those who knew her remember her “What can I get you?” greeting as soon as she opened her front door. Her greatest pleasure in life was “doing for others,” in her selfless manner, always uncomfortable with public recognition and with “putting others out.” She was loving, kind, compassionate, and non-judgmental

She is preceded in death by her husband Harry. She is survived and dearly missed by son Charles (Paula) and daughter Lisa (Robert); grandchildren, Nicholas (Sophia), Lauren (Christopher), and Thomas; great-grandchildren Luke and Georgia.

Relatives and friends are invited to greet Doris’ family on Saturday, August 13th at 10 am at Christ the King Church, 200 Windsor Ave, Haddonfield, NJ where her funeral mass will immediately follow at 11 am. Interment will take place at Calvary Cemetery in Cherry Hill. In lieu of flowers, charitable donations in Doris’ name may be made to Interfaith Caregivers.