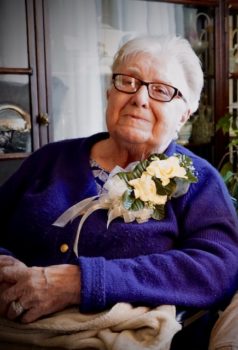 On Mother’s Day, Sunday, May 10, 2020 at age 92, Carolyn passed peacefully at her home in Haddonfield, NJ surrounded by her family.

She was the beloved wife for 69 years of the late Herbert Wallace Hazen; loving mother of Amy Vasko (Jack) of Richmond, VA and Andrea Hazen of London, England; much-loved only child of the late Llewellyn Dale Key and Grace Key (nee Barstow); and much-cherished granddaughter of the late Clark Middleswarth Barstow, MD and Ella Louisa Barstow (nee Folwell).

Born and raised in Bryan, OH, in her early years, Carolyn enjoyed spending time with her father at his garage and dealership, where she developed a passion for cars and Paris, where her father had been stationed during World War I. Carolyn and her parents travelled to Florida every winter for several months to support her father’s failing health, and car rides both long and short became a source of joy for Carolyn. In later years, riding around Haddonfield in springtime to see the flowering trees and shrubs and in December to see the Christmas lights were special delights.

At a young age, Carolyn lost her beloved father to ill health. Her mother Grace was a pivotal figure to Carolyn throughout her lifetime, as were her maternal grandparents, aunt, and uncles. In later years, Carolyn greatly enjoyed researching her Key family ancestors and in 1997 authored and published the book: The Key Family, Philip Key of Colonial Maryland and His Descendants.

As a teenager, Carolyn met her future husband Herb at Hamilton Lake, IN, where they discovered a shared love of boating and spending time on the water. They married in 1950, settled in Haddonfield in 1962, and later built a home at Green Lake, ME. Carolyn adored her late mother-in-law, Laura Lavah Hazen (nee Hedrick) of Marceline, MO with whom she enjoyed countless hours of playing cards over the years.

Carolyn and Herb were married for more than a dozen years before their first daughter was born. During that time, they travelled extensively for Herb’s work, including a 14-month assignment in Spain. They enjoyed many other wonderful experiences over the course of his career, including entertaining clients at Churchill Downs the day Secretariat won the Kentucky Derby.

Carolyn delighted in homemaking, caring for her husband and daughters, planning for and entertaining family and friends. Carolyn and Herb were gracious hosts and friends often commented that ‘the Hazens know how to throw a party’. For more than 60 years, they sent family and friends to their favourite restaurant on the Left Bank of the Seine in Paris.

Carolyn is greatly missed and will long be remembered as a devoted wife, a loving mother, a gracious hostess, and a dedicated volunteer.

Services will be held privately at Fountain Grove Cemetery in Bryan, OH. Memorial contributions in honour of Carolyn may be made to Alpha Delta Pi Foundation, Bowling Green State University School of Education, Haddonfield United Methodist Church, The Philadelphia Orchestra, Wesley United Methodist Church in Bryan, OH, or a charity of your choice.